In 2002, Molecular Machinery: A Tour of the Protein Data Bank was published by the RCSB PDB.  Created by Molecule of the Month author David S. Goodsell, this illustration features 75 select structures from the PDB, showing their relative sizes at a scale of three million to one, and generally describes their critical roles in the functions of living cells.  The image, available as a poster and handout, has been distributed to thousands of PDB users, teachers, and students over the years.

In celebration of the release of more than 100,000 structures in the PDB archive, Goodsell and RCSB PDB have updated this iconic image in a new Tour of the Protein Data Bank.

The 2014 poster uses 96 structures to illustrate the vast range of molecular shapes and sizes in the PDB.  The structures are depicted relative to the cellular membrane and organized in categories related to function.  A scale bar provides a sense of molecular size in nanometers.

Copies of the 2002 and 2014 posters will be part of a raffle at the upcoming ACA meeting.  Visit the RCSB PDB booth in the exhibit hall at the meeting to learn more! 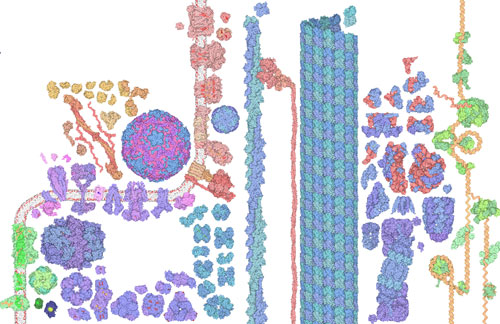 2014 Tour of the Protein Data Bank