RCSB PDB Mobile is a universal app that enables the general public, researchers and scholars to search the PDB and visualize protein structures using mobile devices.

Freely available for the iPhone/iPod/iPad and Android (2.3.3 and above), RCSB PDB Mobile can be used to search the entire PDB database, view the latest released structures, access MyPDB accounts, and view the entire catalog of Molecule of the Month articles.

A program update has been released at the Apple Store and Google play which includes the latest Molecule of the Month article and bug fixes for recent indexing issues.

Known issues will be listed on the RCSB PDB Mobile support page. Currently, the molecular viewer used in the app (NDKmol) cannot support large structures with more than 62 chains and/or 99,999 atoms, and cannot be used on Android 5.0 (Lollipop).  The app will be updated as new versions are made available. 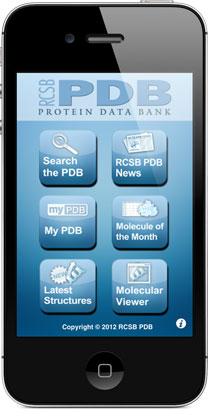