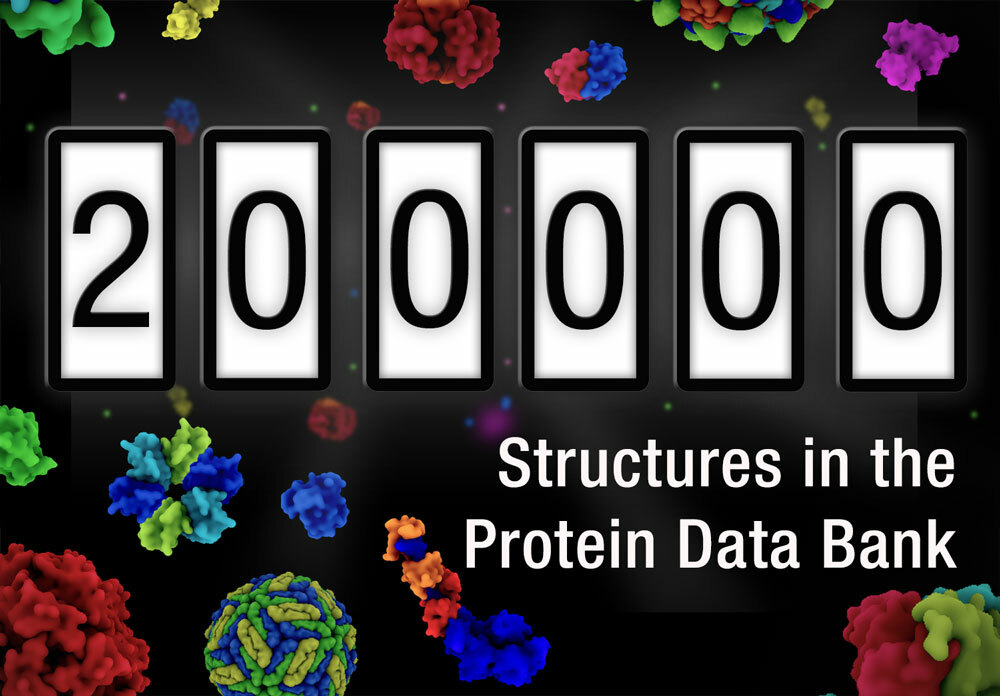 Depositors: Download this image, write the number of structures deposited, and tag us in your photos

Established in 1971, this central, public archive has reached this critical milestone thanks to the efforts of structural biologists throughout the world who contribute their experimentally-determined protein and nucleic acid structure data.

wwPDB data centers support online access to three-dimensional structures of biological macromolecules that help researchers understand many facets of biomedicine, agriculture, and ecology, from protein synthesis to health and disease to biological energy. Many milestones have been reached since the archive released the 100,000th structure in 2014. PDB data have been seminal in understanding SARS-CoV-2, and provided the foundation for the development of AI/ML techniques for predicting protein structure. The 50th anniversary of the PDB was celebrated throughout 2021.

Today, the archive is quite large, containing more than 3,000,000 files related to these PDB entries that require more than 1086 Gbytes of storage. PDB structures contain more than 1.8 billion non-hydrogen atoms.

In the 1950s, scientists had their first direct look at the structures of proteins and DNA at the atomic level. Determination of these early three-dimensional structures by X-ray crystallography ushered in a new era in biology-one driven by the intimate link between form and biological function. As the value of archiving and sharing these data were quickly recognized by the scientific community, the Protein Data Bank (PDB) was established as the first open access digital resource in all of biology by an international collaboration in 1971 with data centers located in the US and the UK.

Among the first structures deposited in the PDB were those of myoglobin and hemoglobin, two oxygen-binding molecules whose structures were elucidated by Chemistry Nobel Laureates John Kendrew and Max Perutz. With this week's regular update, the PDB welcomes 266 new structures into the archive. These structures join others vital to drug discovery, bioinformatics and education.

The PDB is growing rapidly, increasing in size by ~160% since 2011 (doubling in size every 6-8 years). In 2022, an average of 275 new structures were released to the scientific community each week. The resource is accessed hundreds of millions of times annually by researchers, students, and educators intent on exploring how different proteins are related to one another, to clarify fundamental biological mechanisms and discover new medicines.

Since its inception, the PDB has been a community-driven enterprise, evolving into a mission critical international resource for biological research. The wwPDB partnership was established in July 2003 with PDBe, PDBj, and RCSB PDB. Today, the collaboration includes partners BMRB (joined in 2006) and EMDB (2021).

The wwPDB ensures that these valuable PDB data are securely stored, expertly managed, and made freely available for the benefit of scientists and educators around the globe. wwPDB data centers work closely with community experts to define deposition and annotation policies, resolve data representation issues, and implement community validation standards. In addition, the wwPDB works to raise the profile of structural biology with increasingly broad audiences.

Each structure submitted to the archive is carefully curated by wwPDB staff before release. New depositions are checked and enhanced with value-added annotations and linked with other important biological data to ensure that PDB structures are discoverable and interpretable by users with a wide range of backgrounds and interests.

wwPDB eagerly awaits the next 100,000 structures and the invaluable knowledge these new data will bring.